Happy Father’s Day! I’ve been lucky enough to work with some really sweet dads – and a few of them more than once! Today I’m sharing the stories of 4 dads who I’ve been able to work with at least twice! I am so grateful for these families, and the trust and confidence they have in me. This is not an industry with a lot of opportunities for repeat business, so I do not take these folks for granted at all!

After I had been in business for just a year, I had the opportunity to work with Shellie and Bryan on their Virginia at-home wedding. Sadly I don’t have any good photos from their beautiful wedding. But what I do have is a great relationship with Bryan’s parents Pam and Paul. Six months after Shellie and Bryan’s wedding, I got to work on the wedding of Bryan’s sister, Karli, to Kevin. They decided to wed at the {now unavailable} Halcyon House in Washington, DC. Photos by Matt Mendelsohn. 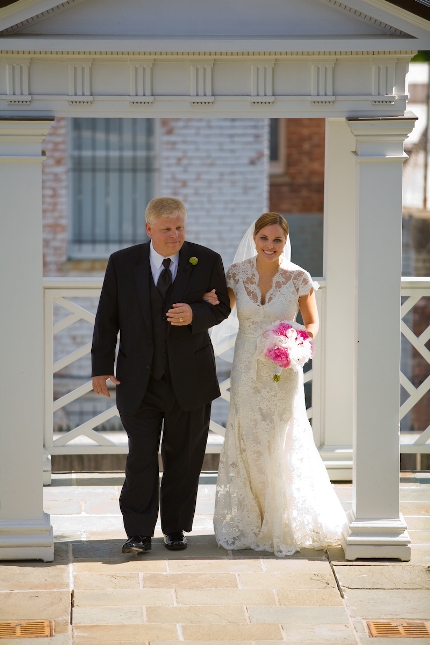 After Karli and Kevin’s wedding I was lucky enough to work on two of Kevin’s siblings’ weddings – first his brother Mitch, just 6 or so months after Karli and Kevin’s wedding (I think at this wedding both Shellie and Karli were pregnant! Yay!). A few years later it was Kevin’s sister Samantha, and her wedding to Mark. Both Mitch and Samantha wed at their mother’s private farm in Front Royal, Virginia. Photo by Natalie Lane. I worked with Natalie and John on both of their daughters’ weddings. Courtney wed Cameron first, in a tent at their home in Fairfax, in June of 2012. This was my “derecho couple” where we had to do some last minute re-set-up due to the thunderstorm (with hurricane force winds) that came through very unexpectedly and at the very last minute. Mackenzie married Mike in October of 2015 at the Newseum in Washington DC. This was a much less eventful wedding, aside from the road closures around the venue. And just this week we started working on a celebration in honor of Natalie and John’s older son’s upcoming wedding!  All photos by Michelle Lindsay. I worked with Mary and Lew Baylor on both of their daughters’ weddings. Kate married Brian in September of 2011. This was my “earthquake couple” – Kate and Brian was set to wed at the National Cathedral when the August 2011 earthquake struck DC and forced us to relocate the ceremony to Episcopal High School. Mary Beth and Chris married 2 years later at Shrine Mont in Orkney Springs, Virginia. It was essentially a destination wedding on the Virginia/West Virginia border where we took over a small resort (think the resort in Dirty Dancing) for the entire weekend. It was an absolute ball. Above two photos by The Observatory.